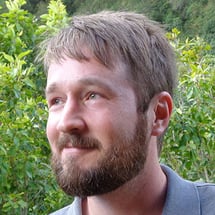 McFunkypants
Christer Kaitila, also known as McFunkypants, made his first videogame before the internet was invented. Since then, he's created around thirty games, forty songs, two non-fiction books, one tabletop RPG, twenty articles and tutorials, two board games, a dozen websites, twenty paintings, one patented top-secret dance move, two tree forts and over five hundred sandcastles. A viking child of the arcade scene and disco funk master extraordinaire, he is known to spread kindness, enthusiasm and positivity everywhere he goes. He has been accused of helping others achieve their dreams on multiple occasions, though he denies such allegations vehemently. He only beatboxes when he thinks nobody is around and he loves eating homemade apple pie. He created the gamedev gamification community One Game A Month which is so meta it rocks. He likes to lend a hand at Ludum Dare, indiegames dot com, and the Charity Game Jam. He would love to hear from his fellow game developers on twitter (@McFunkypants) so please feel warmly welcome to get in touch. Personal Blog: http://www.mcfunkypants.com Music: http://soundcloud.com/McFunkypants Art: http://mcfunkypants.deviantart.com Google+: http://google.com/+ChristerKaitila Twitter: https://twitter.com/McFunkypants
www.mcfunkypants.com/
Tutorials
Quick LinksExplore popular categories